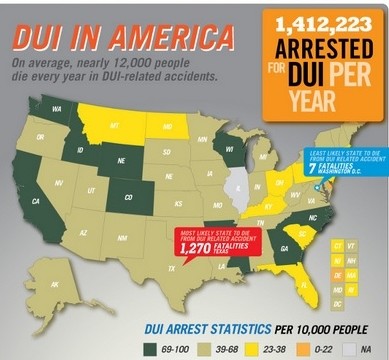 With a partisan split in the state legislature, Colorado won't see as many laws passed this year. For the most part, I count that as a positive occurrence. An important exception is House Bill 1043, brought forward by second-term Rep. Lori Saine (R-Firestone). HB 1043 would make it substantially easier for district attorneys to prosecute repeat DUI offenders with a felony offense. Earlier this month, the bill unanimously passed through the House Judiciary Committee. It must make a stop in the House Finance Committee before getting its first full floor hearing. As you can see in the graphic below, Colorado has one of the highest rates of DUI arrests per 10,000 residents. Would making the law somewhat tougher help? Fewer fatalities, one … END_OF_DOCUMENT_TOKEN_TO_BE_REPLACED

Two years ago Governor Bill Ritter came right out of the gate and ran smack into a tough veto choice that caused friction with his Big Labor supporters. Ritter made up for the nixing of House Bill 1072 later in 2007 with an executive order giving union organizers a gold-plated invitation into Colorado state government. Now, to some extent, history is replaying itself. As the Denver Post's John Ingold reports, the choice Bill Ritter is confronted with now is whether to sign or veto the bad policy that is Senate Bill 180. The bogus argument used for SB 180 -- which narrowly passed the Democrat-controlled legislature -- is that firefighters need greater union bargaining rights to ensure they get needed safety equipment. … END_OF_DOCUMENT_TOKEN_TO_BE_REPLACED

Senate Bill 57, the school financial transparency bill, has defied anyone's expectation and made it through one-half of the legislature. From the senate, it's now on to the house. Apparently, but not too surprisingly, the lobbyists for the education establishment are looking for a way to kill the bill without looking like they oppose transparency. The COST blog exposes the details. School districts can use low-cost technology to place expenditures and revenues online in a searchable format; that excuse has been worn thin. So I guess it's time to resort to other ineffective arguments, along with procedural tactics and other technicalities. What about the people's lobby? Will they turn out again to speak out for their right to see … END_OF_DOCUMENT_TOKEN_TO_BE_REPLACED

Denver Post columnist Al Knight has a fine piece today stating the arguments why the Colorado legislature should reject Senate Bill 88, the mandate to provide health-insurance benefits to same-sex couples: it embroils the state in legal battles, it violates the will of state voters, it has a negative impact on a tight budget, etc. No, instead, Republican state senator Scott Renfroe opened his mouth during the SB 88 debate, and played right into the hands of the Left. … END_OF_DOCUMENT_TOKEN_TO_BE_REPLACED

Colorado Republican Party chairman Dick Wadhams recently sat down with the Colorado Statesman for an extended interview. There isn't much in the way of new information, but there is one passage worthy of comment. Namely, it's interesting to see whom Wadhams is talking up for the U.S. Senate race to challenge the newly-selected Michael Bennet: … END_OF_DOCUMENT_TOKEN_TO_BE_REPLACED