There is a long list of statewide ballot initiatives facing Colorado voters in 2008. Here are my thoughts and insights on each of the measures. Here’s who I am if you want to know where I’m coming from.

Two of my primary sources for information on the ballot measures are the official Colorado blue book produced by the state legislative staff and Ballotpedia. Another reference that will lead you to the web pages of supporters’ and opponents’ campaigns – wherever available – is the Independence Institute’s Issues 08 page.

Here are links to ballot guides from others whose opinions and insights I respect, though we don’t completely agree (I will keep updating this list as I see more guides posted): 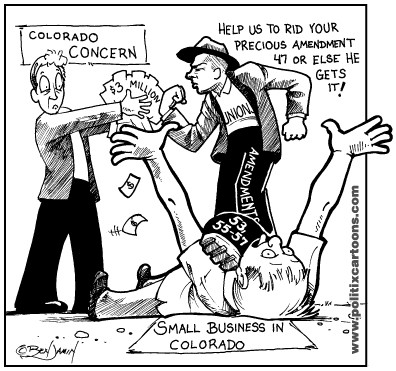 As of October 2, union leaders have successfully extorted $3 million from business leaders to fight Amendments 47, 49, and 54, in exchange for removing their four economy-crushing measures from the ballot. Amendments 53, 55, 56, and 57 have been crossed out below. These measures still will appear on the mail-in ballots, but votes will not be tallied for or against them. So you don’t need to waste your time on them.

Without further ado, here are my recommendations and accompanying explanations for each of the proposals on Colorado’s 2008 ballot: