Jefferson County Parent Teacher Association leaders have drawn criticism for making suggestions about gun violence against a new school board director. …Read the rest of my article at Watchdog Wire Colorado…. … END_OF_DOCUMENT_TOKEN_TO_BE_REPLACED 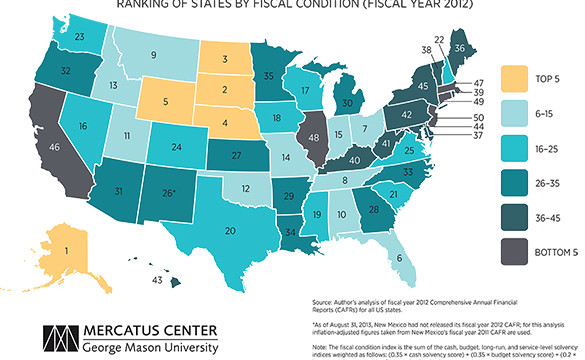 Colorado trails most of its neighbors in the state’s ability to pay current and future bills. So says a new analysis from George Mason University’s Mercatus Center. “State Fiscal Condition: Ranking the 50 States” by economist Sarah Arnett compares the states’ respective abilities to cover short-term and long-term financial obligations. ...Read the rest of my article at Watchdog Wire Colorado.... … END_OF_DOCUMENT_TOKEN_TO_BE_REPLACED

In a time when a large fiscally conservative grassroots movement like the Tea Parties have developed a strong voice, we shouldn't be surprised to see calls for greater transparency in government operations. Not only when it comes to the fiscal ledger ("if you can't defend it, don't spend it"), but also when it comes to those union negotiations that drive so much of government spending. Should any government contract negotiations be done behind closed doors? Why should unions be treated any differently? In Colorado Springs a citizen lawsuit has pressured one of the state's largest school districts to concede to opening up one teachers union bargaining session to public observation. (Decisions on future sessions pending... most likely on … END_OF_DOCUMENT_TOKEN_TO_BE_REPLACED

Kudos to my friend and colleague Todd Shepherd (of Complete Colorado fame) for catching a surprise exclusive live interview with Colorado's new governor. In the middle of hosting the Sunday afternoon show on 850 KOA, Todd's jaw hit the floor when none other than John Hickenlooper heard his name being discussed and called in to the show while en route from Pueblo to an event in Colorado Springs. Click here for the full hour's audio: the Hickenlooper call starts about halfway through (not to be completely overshadowed is Todd's discussion with Colorado RNC committeeman and former state treasurer Mark Hillman at the top of the hour). Todd took a few minutes to get the softballs out of the way. But then he went to work with a series of … END_OF_DOCUMENT_TOKEN_TO_BE_REPLACED

Although it's not crucial to winning the majority in the state senate -- the Democrats have held on -- it seems like we have a small dispute over the actual standing of the race in District 16, where conservative Republican Tim Leonard and liberal Democrat Jeanne Nicholson are locked in a close count. Lynn Bartels reported at 10:30 this morning in the Denver Post (H/T Complete Colorado):And in a multi-county seat stretching from the western suburbs to mountain towns, Democrat Jeanne Nicholson was up by six votes over Republican Tim Leonard, according to a tweet from Sen. Morgan Carroll, D-Aurora. A Tweet? Could we use some real confirmation, please? Outlets like 9News and The Denver Channel (Bartels' own Denver Post election results page … END_OF_DOCUMENT_TOKEN_TO_BE_REPLACED

So if the Denver Post insists that a "recount looms" in Colorado's U.S. Senate race, why do I predict that Ken Buck will defeat appointed incumbent Michael Bennet by four points? What makes me so confident that my prognostication is more accurate than the hype? On The Spot blog, Post political editor Curtis Hubbard lists the most recent polls from the seven different major firms tracking this race, along with the New York Times blog prediction, listed as follows from most recent to oldest: … END_OF_DOCUMENT_TOKEN_TO_BE_REPLACED

In the most recent edition of The Enterprise Group Political Report ("At the Nexus of Business and Politics") email newsletter, Andrew Boucher of Boucher Strategies in Fort Collins writes:I'll make three fearless predictions for November: 1. In the state legislative races, there will be at least one absolute stunner where a Republican no one has ever heard of knocks off an incumbent Democrat no one knew was in trouble. 2. Everything down-ballot is going to swing heavily towards the Republicans. (The less a voter has been paying attention to a particular race, the more likely they'll default to the the national mood. Call it surfing the wave.) 3. Ben DeGrow is exactly right: "In this kind of generic political environment, in … END_OF_DOCUMENT_TOKEN_TO_BE_REPLACED

The Denver Post's Michael Booth is to be commended for his efforts: He's working really hard to bolster the flagging campaign of appointed junior U.S. Senator Michael Bennet. Maybe it's some sort of "Michael B" bond. Who knows? Though artificially inflating Bennet's hopes in the end isn't a terribly kind thing to do. Seriously, a new Rasmussen survey comes out today showing Ken Buck breaking the 50 percent mark at 51-43, confirming a trend of independent polls that have the Republican challenger beating Bennet outside the margin of error. Yet Booth leads with a Democratic Senatorial Campaign Committee (DSCC) poll showing Bennet with a statistically insignificant lead of 48-46. … END_OF_DOCUMENT_TOKEN_TO_BE_REPLACED

Update, 8/21: Lynn Bartels' story in today's edition of the Post fills out a little bit more detail and gives more attention to both the major party candidates... including a lede that identifies Perlmutter's Bush-bashing blameshifting (which makes the headline above obsolete). Guess the blog focus on the Libertarian candidate was supposed to be the teaser for today's story (?). I also was promised some video footage from the Frazier campaign, and will post that here when it arrives. This morning featured the first showdown of Colorado 7th Congressional candidates at a chamber of commerce-sponsored debate. It was practically in my backyard, but who has $20 or more to swing for such luxuries? The only coverage of the debate I've found … END_OF_DOCUMENT_TOKEN_TO_BE_REPLACED