Update IV, 5:15 PM: For the record and for the sake of full disclosure — yes, the information related to open negotiations that I have requested from Jeffco Public Schools has been done in my professional capacity as a senior policy analyst for the Independence Institute. My personal and professional opinions happen to be in very close harmony on this issue. And both versions of the recording — the low-quality one I deleted and the higher-quality one linked just below — came from a concerned citizen who attended and recorded the public meeting. Thankfully, because the district’s recording of the relevant part of the meeting was not posted due to the aforementioned “system error.”

Update III, 3:40 PM: I have obtained a better 5-minute recording of the Jeffco Board’s discussion and vote. The previous recording has been deleted. 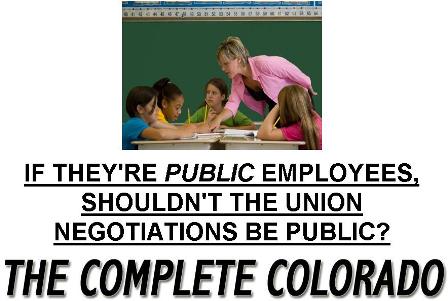 Update, 2 PM: I received an official response from Jeffco’s communications office about the significance of Thursday’s 2-2 vote: “In answer to your question about the board vote last week on opening/closing negotiations, the 2-2 vote taken by the board has left the bargaining team uncertain as to the wishes of the board majority. Therefore, until the bargaining team receives direction from a majority of the board, scheduled negotiations sessions have been cancelled.”

The controversies over government collective bargaining transparency in Colorado are starting to pile up. Last week I brought your attention to the unsuccessful effort of Aurora citizens to open up the city’s police and fire union negotiations. The big story has been from Colorado Springs, as transparency won a partial victory after a citizen lawsuit forced one bargaining session to be open for public observation.

Now the issue has come to life in my own backyard. By all appearances, Jeffco Public Schools officials are doing their best to keep negotiations with the Jefferson County Education Association (JCEA) teachers union out of the light of day. Article 5-3-5 of the existing bargaining agreement says:

Negotiations shall be conducted in open sessions, unless both parties agree to the contrary.

On April 11 at a meeting of the Jefferson County Republican Men’s Club — after praising the district for its exemplary efforts at financial transparency — I asked featured speakers Jeffco superintendent Cindy Stevenson and JCEA president Kerrie Dallman whether any of their negotiations would be open to public observation. Stevenson deferred to Dallman, who declared that the parties had decided all negotiations would be closed. But who exactly made the decision, and how? Following up with district officials, the closest thing to a clear answer I received was that the Board of Education “meets in executive session to confidentially give direction to and receive reports from its negotiating team.”

It gets better, though. At the April 21 special Board meeting, director Laura Boggs brought up Dallman’s public comments and asked why the Board had never formally voted on the issue. A vote was called on a motion to close negotiations, a vote that resulted in a 2-2 split decision (director Robin Johnson reportedly was absent from the meeting).

Boggs believes the failure to secure a majority in favor of keeping the public away from union bargaining sessions leaves the agreement’s default open negotiations language intact. Her argument has merit. I presented the question in a call to the Board office on Friday, and received a tentative answer that the split vote leaves the status quo of the private decision to close negotiations in place. The district’s employee relations director and legal counsel Allen Taggart has yet to respond to my voice and email messages seeking an official response.

Still, I wanted to judge the dispute for myself by listening to what took place. The Board posts recordings of all its official meetings online for further review. Unfortunately, the link says that a “system error limited recording at end of meeting.” The particular discussion and vote on whether to open or close union negotiations was left off. The irony keeps piling up, again raising the question that lingers from natural curiosity: What are they trying to hide?

Back in March Jeffco Public Schools held a highly-touted “Budget Summit” with representatives from the school board, district officials, and employee union. The public was kept out at the request of a hired federal facilitator. Behind closed doors, they came to a consensus of how to cut $40 million from the district’s budget. Since that time the legislature has limited the cuts to Jeffco and other districts by at least 25 percent, and maybe as much as 50 percent.

In an earlier phone conversation, Taggart agreed that the “Budget Summit” talks could be characterized as framing the financial piece of union negotiations. But with the changing numbers coming out of the General Assembly, it’s not clear the financial question is settled. Nor have other issues been addressed publicly, such as granting the union 275 free, tax-funded, unsupervised release days each and every year to conduct its business. That’s just one example of a provision in the JCEA bargaining agreement, which the district currently is committed to deciding behind closed doors.

Neither parents and other taxpaying citizens, nor the journalists who help bring them information, are welcome at the table to observe how tax dollars are divvied up and many operational policies are established. I just so happen to think that good government conducts its affairs in the light of day. Here’s hoping we can get a positive resolution for greater transparency in Jeffco — and soon.