Thanks to Complete Colorado linking to this interesting Channel 7 story breaking down political campaign giving, I ran into some interesting data on the reported campaign contributions here in Colorado’s 7th Congressional District.

I’ve pasted a screenshot of the chart from Open Secrets: 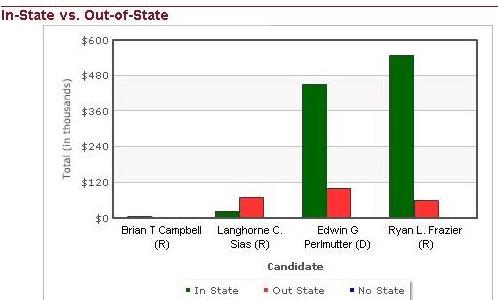 1. Republican Ryan Frazier has raised $607,733 — 90 percent from within Colorado and 76 percent from the Denver metro area ($464,723). The top 10 individual ZIP codes for total contributions donated to the Frazier campaign are all in the Denver metro, and many of them within the 7th CD. Frazier is generating most of his support from his home turf. More than 95 percent of his financial backing comes from individuals.

2. Democrat incumbent Ed Perlmutter has raised $551,239 — a smaller but respectable 82 percent from within Colorado and 70 percent from the Denver metro area ($385,867). Similar to Frazier, the top 10 individual ZIP codes are all from the Denver metro. But, as I noted after the previous quarter, nearly half came from PACs and political committees associated with corporations, trade organizations, trial lawyers, labor unions and various liberal special interest groups. This past quarter, more than half came from PACs and political committees.

3. Republican Lang Sias has raised only $90,175 — of that, only 24 percent is from within Colorado and only 10 percent from the Denver metro area. The number one metro area and ZIP code contributing to the Sias campaign is from Washington D.C. In fact, the only fundraising area in which he is relatively competitive with the incumbent is in support from D.C. area donors: $37,400 for Perlmutter to $25,150 for Sias. (For Frazier, it’s somewhere less than $11,000.)

Nothing personal against Sias, as I have met him personally and commend him to be a good man with an honorable record of military service. He simply has not developed a local base of support to run a credible campaign in 2010. That said, I do hope he takes a look at other ways besides running for Congress in which he can stand tall as a local leader for conservative issues.