…Hank Brown, a former U.S. senator and former University of Colorado president, withdrew his endorsement, setting off a domino effect not only among prominent Republicans, but Maes’ core, grassroots base.

Tea Party leaders across the state today said in often harsh terms that they wanted Maes to drop out….

Let me explain. No… let me sum up:

Tea Party leaders are not “party bosses.” They and many more who should otherwise be inclined to support the accidental Republican nominee for governor recognize the obvious: There is no path to conservative victory in the governor’s race with Dan Maes or Tom Tancredo. Where in the world does Maes expect to get support? And what can he do from here on out except drag down the rest of the ticket? I hope and pray that Maes is ready to do the honorable thing, but I won’t lose sleep waiting for it to happen.

Quoth Dr. Seuss, “The time has come.” Will Dan Maes go? If not, this picture will become a fixture at Mount Virtus for the next two months: 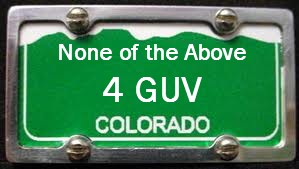 (And this will be my final word on the topic. Let’s focus on the things we can win.)

On the other hand, if Maes does the right thing….