Last week I was privileged with the opportunity to sit down and meet Dr. Michael Fallon, the Republican candidate for Colorado’s 1st Congressional District. For those in the know, that phrase typically evokes shrugs of apathy.

A Republican in the 1st CD? That covers the heart of Denver. The city has been represented by the tag team of Lefty Democratic icons Pat Schroeder and Diana DeGette for a combined 37 years. Republicans has held the office for a total of one two-year term since 1946. According to the Cook Partisan Voting Index, only 49 of 435 Congressional Districts are considered more heavily Democratic.

But don’t think for a moment that deters the 45-year-old Fallon.

“Diana DeGette is out of touch with the district,” the GOP candidate pointedly remarked at the Lakewood Starbucks where we met. There is some evidence out there to bolster his case and give shreds of hope. A Magellan Strategies survey performed two months ago among a representative sample of CD1 voters show the incumbent with unimpressive favorability and job approval ratings at 48 percent. DeGette’s voting record very closely mirrors Speaker Nancy Pelosi’s: 99.2 percent of the time, by the Washington Post‘s count.

Michael Fallon is on a mission, criss-crossing the district with a team of volunteers wearing their walking shoes. Focusing primarily on unaffiliated voters, who make up 30 percent of CD 1 (Democrats are more than 50 percent and Republicans less than 20 percent), he has carried his message of job growth, low taxes, spending discipline and transparency to thousands of doors so far. Fallon believes he can tap into angst among some fiscally conservative Democrats.

Denver’s Republican candidate for D.C.’s Capitol Hill also leans a bit on populist themes of what’s fair for the country should be fair for Congress — whether it’s social security or health insurance plans. “Congress has lost direction on both sides of the aisle,” Fallon observed of the fiscal recklessness emanating from the Beltway, willing to give his own party its fair share of the jabs. “Republicans started it, Democrats perfected it.” 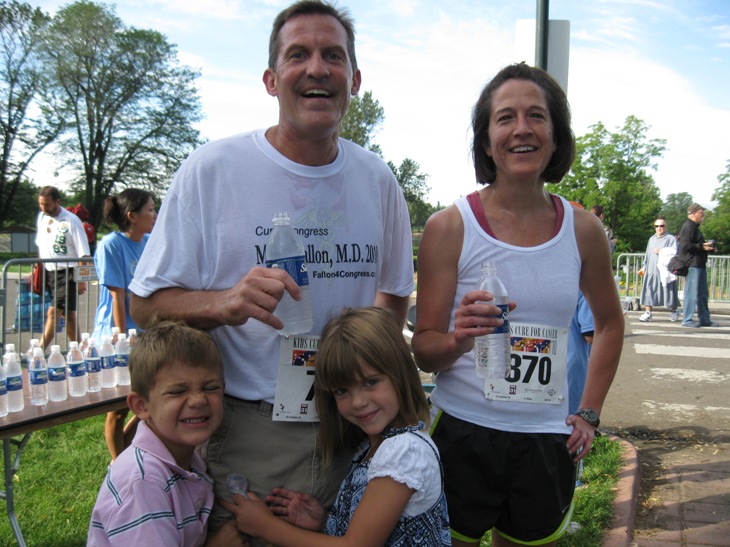 When it comes to the issue of health care, Fallon knows very well firsthand of what he speaks. He served as an emergency room physician in several Denver hospitals before launching out as an entrepreneur and founding three urgent care clinics in the metro area. He understands the medical side, and the business side. He can articulate clearly and passionately the massive failings of Obama Care and the need for free market solutions. While he and his family have participated in the Kids Cure for Cancer event (see photo), he has marked his Congressional campaign with the fitting theme “Cure for Congress.”

As much ambition as Fallon brings to tackle the monumental campaign challenge before him, he openly and firmly rejects any longer-term aspirations. In a recent interview with the Denver Post‘s Chuck Plunkett, he was pressed into saying he would give serious consideration to stepping into the messy governor’s race if the tainted primary winner drops out.

But in our conversation, Fallon was more adamant that he is indeed committed to taking on DeGette this fall. “This is my calling to make a difference now. It’s not a career,” he said. “I want to do my part and go home.” He was more than open to the idea of promoting Congressional term limits not only as a campaign promise but also as a national issue.

He is as gracious and down-to-earth as anyone you’ll meet running for Congressional office. With self-deprecating humor and modesty, the candidate acknowledged that he is often introduced to strangers as “Barbara Fallon’s son.” His mother is an energetic fixture of the Denver Republican Women’s Club, among other venues, and one of the more respected people in the party’s local grassroots movement.

Fallon entered the race only in April, and hit the ground with his door-to-door grassroots campaign in June. While he is committed to plugging away, he also sees himself caught in a vicious cycle. Pundits and politicos write off his race as “unwinnable,” making it more difficult to raise resources and attract support. His frustrations about this “self-fulfilling prophecy” are evident, but they seem far less to consume Fallon than to motivate him to prove just how winnable the race is.

Besides a newfound intense dedication and an especially favorable political environment, another reason why he sees improved chances for victory is the strong team of Republican candidates in Denver — the depth and quality of which I haven’t seen in my eight years here in Colorado. Fallon spoke highly of state legislative candidates Danny Stroud, Pauline Olvera, Christine Mastin, Derec Shuler and Joshua Sharf.

All in all, Dr. Fallon’s confidence and enthusiasm can be rather persuasive. I have decided to upgrade Republican chances of winning this race from “practically impossible” to “very small.” Even if the challenger falls short of defeating DeGette but makes the race closer than expected, he can hope to energize Republicans and conservative independents in Denver to the benefit of other local and statewide candidates on the ticket.

Seeing the good doctor in Congress would be wonderful, but win or lose he indeed may have found an important calling for his brief and unneeded political career — making Fallon a true citizen-statesman. “I live a very blessed life,” he said. “I’ve taken care of the people of Denver for 15 years. This is just another way of doing that.”

Michael Fallon, thank you for the breath of fresh air.