On this Memorial Day, I can’t think to do any better than point you back to last year’s remembrance: 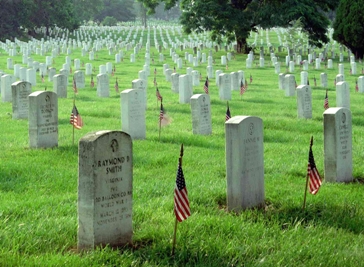 O beautiful for heroes proved
In liberating strife,
Who more than self their country loved,
And mercy more than life!
America! America!
May God thy gold refine,
Till all success be nobleness,
And every gain divine.

Today, pay your respects to a fallen soldier, sailor, airman, Marine – and to their loved ones still with us. And donâ€™t forget to thank the troops you meet for their service to us all. Happy Memorial Day!

Otherwise, I defer to this Saturday Wall Street Journal column by Peggy Noonan (H/T Steve Meyer) on the need to renew American fascination with the military hero. After profiling the famous Sergeant Alvin York and Audie Murphy, Noonan concludes:

I thought of these two men the other night after I introduced at a dinner a retired Air Force general named Chuck Boyd. He runs Business Executives for National Security, a group whose members devote time and treasure to helping the government work through various 21st-century challenges. I mentioned that Chuck had been shot down over Vietnam on his 105th mission in April 1966 and was a POW for 2,488 days. He’s the only former POW of the era to go on to become a four-star general.

When I said “2,488 days,” a number of people in the audience went “Oh!” I heard it up on the podium. They didn’t know because he doesn’t talk about it, and when asked to, he treats it like nothing, a long night at a bad inn. Warriors always do that. They all deserve the “Oh!”

Finally, straying a bit further afield, here are a couple random Audie Murphy ephemera from my own life:

Find a brief moment today for some respectful silence and reflection.