Update, 5:00 PM: Witticism of the day goes to the Wall Street Journal’s James Taranto, who observes that “[Reid’s] success to this point seems something of a miracle–an inspiration to dour, foolish men everywhere.”

Was that one of the painful throes of sheer desperation we heard from Senate Majority Leader Harry Reid yesterday?

Senate Majority Leader Harry Reid took his GOP-blasting rhetoric to a new level Monday, comparing Republicans who oppose health care reform to lawmakers who clung to the institution of slavery more than a century ago….

“Instead of joining us on the right side of history, all the Republicans can come up with is, ‘slow down, stop everything, let’s start over.’ If you think you’ve heard these same excuses before, you’re right,” Reid said Monday. “When this country belatedly recognized the wrongs of slavery, there were those who dug in their heels and said ‘slow down, it’s too early, things aren’t bad enough.'”

Wow, what an apt analogy comparing us pesky ObamaCare opponents with the 19th century American defenders of chattel slavery because, you know, ObamaCare is so much about liberty. How else would you explain the extra layers of costly medical bureaucracy awaiting Americans if we vote for Harry Reid’s idea of health care reform: 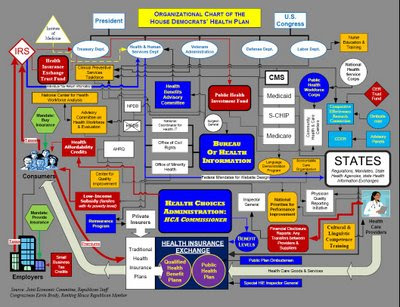 Memo to Nevada: send this washed up hack home in 2010. Judging by his latest actions, I’d say he has started preparing for a post-Senate, village-based career.