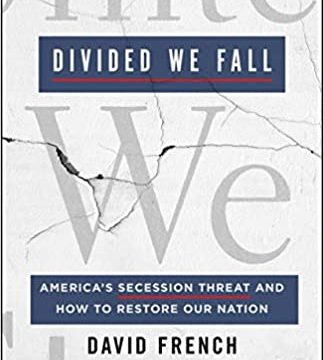 Amid the increasingly vitriolic cacophony of our angry partisan bickering, David French stands out as a Tennessee-twanged voice in the wilderness. This book offers a less-than-rose-tinted take on America’s political polarization. Without being overly alarmist, Divided We Fall offers a sobering analysis of our nation’s looming future and a prescription for readers to help reverse the trend.

French cut his teeth in the conservative movement and to this day remains a committed evangelical Christian who is devotedly pro-life and an expert defender of religious liberty. Even so, he treats the faults of America’s political left and right in a remarkably evenhanded manner. One can imagine an avowed partisan of either side alternatively nodding in agreement and heaving exasperated objections. That attests to the fact the author hasn’t missed the mark by much.

The book’s author draws upon not only a treasure trove of current events that recently raced through the 24-hour news cycle and our collective consciousness, but also a remarkably insightful but obscure academic paper that offers the most for the intellect to chew on. The reader’s imagination is equally enlivened by his two fictional, but certainly plausible, scenarios of how our great republic could break apart.

French offers a prescription to restore the health of the body politic, but confesses to not being optimistic that the course of treatment will be adopted. The civic medicine he prescribes is a heavy dose of federalism, allowing communities in California and Tennessee to pursue their own health care, environmental and social welfare policies, while protecting the Bill of Rights’ guarantees for every citizen.

I am highly sympathetic to the recommendations French offers, have been in agreement for years that the United States not only can but must shed earlier stigmas associated with federalism and devolve power from the central government. Still, questions remain, perhaps for another volume, about how exactly to navigate the challenges around the boundaries. What happens to the Supreme Court’s creation of a fundamental right to abortion and redefinition of marriage? How will progressives be persuaded, in the face of what they perceive as an existential threat, to relinquish control of climate policies in some states?

At bottom, the change French seeks is one of attitude and culture. As he acknowledges, making society civil again is not the province of government. Instead, he leaves the reader with admonitions for how to embody the courage and decency that will shape the future. The conclusion calls for both a reverence for our nation’s founding creed and a hearkening to the Old Testament prophet’s threefold call: to do justice, love mercy and walk in humility (Micah 6:8). Seeds are also planted for us to consider how we might guide, and where necessary, rebuild institutions according to these virtues.

This book also appealed to me as a student of 19th-century American history, summoning memories of a dusty degree and untold numbers of other books digested about sectionalism, the Civil War and Reconstruction. Thus I appreciated his citations from James McPherson, the dean of Civil War history, and his sound analysis of the conditions that made possible the deadly secession crisis of 1860-61.

In the same spirit, I spotted a couple of problems with the text that made me wonder about the editing process. First, a miscalculation that assigned 134 years as the amount of time that’s passed since Appomattox. And second, in a passing reference, the conflation of Chattanooga’s Missionary Ridge with Gettysburg’s Cemetery Ridge.

But those are tiny errata magnified in the eyes of a history nerd, compared with the timely, relevant and compelling message in this book. History teaches us that it’s hard for those of us living in the moment to see what’s coming around the corner. But the divisive reality that French foresees for our nation is so credible and alarming that it ought to stir the sleepy or fearful citizen into action.

This review is cross-posted at Goodreads.