As Election Day draws closer, appointed Democrat Secretary of State Bernie Buescher can’t be feeling too good. He has been nagged by his office’s failure to ensure that overseas military personnel have timely ballot access, perhaps affected by his long hours away from the office.

Then yesterday comes the painful, ironic news of a campaign finance complaint against the state’s chief election officer. As reported by Steven Paulson of the Associated Press:

A Denver attorney has filed a complaint against Secretary of State Bernie Buescher claiming Buescher violated state law by using state workers to coordinate his campaign for re-election.

A press release from the campaign of Republican opponent Scott Gessler highlights the other part of the complaint:

On Tuesday, a private citizen filed two complaints against the Secretary of State for violations of state law. The first alleges that Buescher illegally used the Colorado state seal on his campaign materials. According to guidelines from the Secretary of State’s office, it is illegal for any political organization to use a facsimile of the state seal.

As mentioned in the AP story, the complaint about Bernie Buescher using a state employee for campaign purposes without reimbursing taxpayers — unlike the scrupulous actions of his Republican predecessor Mike Coffman — stands out as the more serious charge of the two. But the other one, using the state seal for political campaign purposes, is much easier to show to readers. For now, you can go to his website to see what I mean. For future reference, here a couple screen shots as examples: 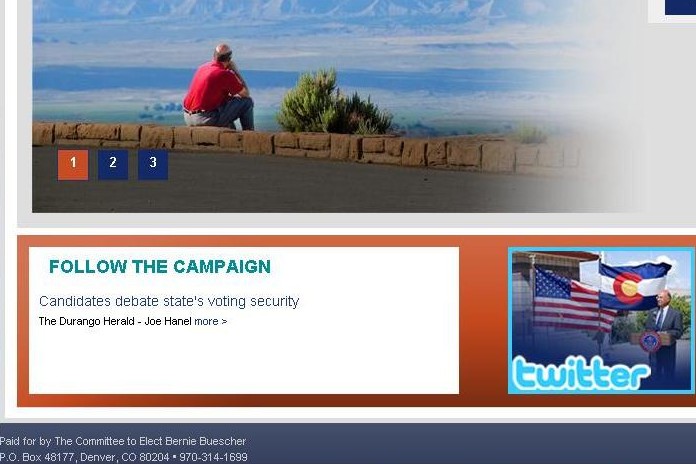 The state seal appears in the lower right hand corner, on the podium in the picture 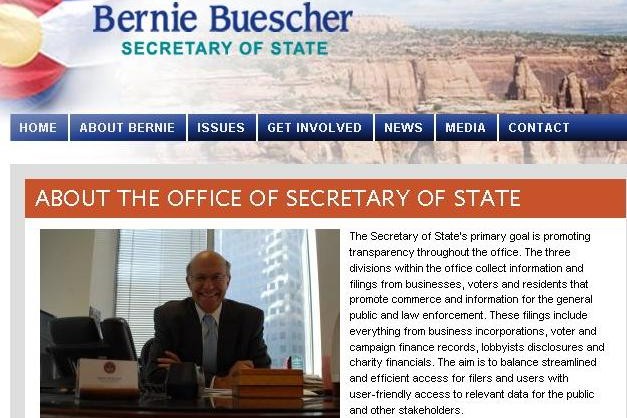 Apparently taken in the Secretary of State’s office, this shot features the official business card with state seal displayed at bottom left

The site also contains numerous other pictures of bill signings where the official state seal is prominently displayed.

But regardless, I’m looking forward to having the office occupied by a military veteran and qualified and competent private-sector attorney who understands campaign finance law and believes in election integrity, rather than by a political appointee who stands out for doing a less-than-diligent job and may even have run afoul of the campaign finance law he’s supposed to enforce.

Until then, Buescher’s case is in Attorney General John Suthers’ hands.