Editor’s note: I have included my most highly recommended Lincoln book selections at the end of this post, if you care to read that far.

Since the celebration of Abraham Lincoln’s birthday was subsumed under the generic President’s Day label, the significance of tomorrow often is forgotten. But I would have a difficult time omitting a commemorative mention of the significance of February 12 – especially this year.

In both the Gregorian and Western Christian church calendars, 2006 runs the same pattern as 1865, the closing months of Lincoln’s life – since recounted in legendary memory. The assassination of the 16th President took place on the night of Good Friday, April 14, the same date in which American Christians and others will celebrate Christ’s divine sacrifice on Mt. Calvary this year. The timing of Lincoln’s murder established a quasi-religious mythology surrounding the Great Emancipator. 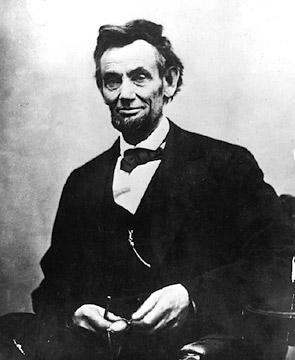 Yet in his timeless and moving Second Inaugural Address, given six weeks before his death, Lincoln acknowledged the transcendence of the Creator’s purposes over the designs of men (including his own) in the bloody affair of our nation’s Civil War:

Neither party expected for the war the magnitude or the duration which it has already attained. Neither anticipated that the cause of the conflict might cease with or even before the conflict itself should cease. Each looked for an easier triumph, and a result less fundamental and astounding. Both read the same Bible and pray to the same God, and each invokes His aid against the other. It may seem strange that any men should dare to ask a just God’s assistance in wringing their bread from the sweat of other men’s faces, but let us judge not, that we be not judged. The prayers of both could not be answered. That of neither has been answered fully. The Almighty has His own purposes. “Woe unto the world because of offenses; for it must needs be that offenses come, but woe to that man by whom the offense cometh.” If we shall suppose that American slavery is one of those offenses which, in the providence of God, must needs come, but which, having continued through His appointed time, He now wills to remove, and that He gives to both North and South this terrible war as the woe due to those by whom the offense came, shall we discern therein any departure from those divine attributes which the believers in a living God always ascribe to Him? Fondly do we hope, fervently do we pray, that this mighty scourge of war may speedily pass away. Yet, if God wills that it continue until all the wealth piled by the bondsman’s two hundred and fifty years of unrequited toil shall be sunk, and until every drop of blood drawn with the lash shall be paid by another drawn with the sword, as was said three thousand years ago, so still it must be said “the judgments of the Lord are true and righteous altogether.”

Even though he was mortal flesh like the rest of us, the Kentucky-born son of Springfield achieved a greatness and fame he could scarcely have imagined. As he uttered in his Gettysburg Address on November 19, 1863, with a true sense of awe and humility:

The world will little note nor long remember what we say here, but it can never forget what they did here. The brave men, living and dead, who struggled here, have consecrated it far above our poor power to add or detract.

In hindsight, the farewell address Lincoln gave to his friends in Springfield, Illinois, 145 years ago today (February 11, 1861) , reads somberly and fatefully – knowing that later to have fulfilled his great calling, he would not survive his term as the nation’s Chief Executive:

My friends, no one, not in my situation, can appreciate my feeling of sadness at this parting. To this place, and the kindness of these people, I owe everything. Here I have lived a quarter of a century, and have passed from a young to an old man. Here my children have been born, and one is buried. I now leave, not knowing when, or whether ever, I may return, with a task before me greater than that which rested upon Washington. Without the assistance of the Divine Being who ever attended him, I cannot succeed. With that assistance I cannot fail. Trusting in Him who can go with me, and remain with you, and be everywhere for good, let us confidently hope that all will yet be well. To His care commending you, as I hope in your prayers you will commend me, I bid you an affectionate farewell.

Abraham Lincoln would never again return to Springfield, but in a coffin. Yet such was the cost of his greatness. And though recognizing and appreciating the great deeds of great men in times past – especially “dead white males” – may be out of vogue these days, we all could do a lot worse than to spend sometime this February to delve into a book about Lincoln’s life. There are so many from which to choose, but I highly recommend these three: