Home General RMA Starts Reviewing the State of the State

As most of my readers already know, several members of the RMA attended the Governor’s State of the State speech yesterday at the behest of the Governor’s office and House leadership. Afterwards, they got a private blogger press conference with Governor Owens and some photo-ops. 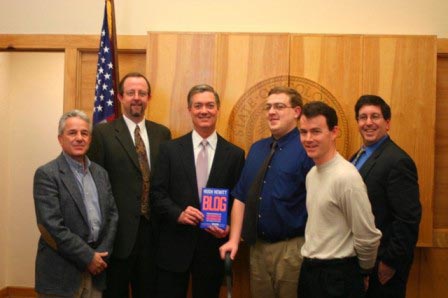 Michael is the first to flesh out some serious analysis: the governor laying down the veto gauntlet and which applause lines the Democrats in the chamber sat out on.

The Kestrel suggests better educating Coloradans about the major role Amendment 23 has played in the budget crisis. He also has linked to the full text of the governor’s address.

Joshua catches the new Senate president napping during the speech – probably busy dreaming about all the paychecks, textbooks, and doctors she’s going to provide the people of Colorado.

Jim highlights the vapid response of a so-called “progressive” to RMA’s activities yesterday.

More analysis is sure to come.