If I’ve been less than inspired to write much about the governor’s race recently, I’m too downright disgusted to follow it now. I’d rather focus in on a couple items following up on my latest projection of Colorado’s state senate races:

1. The top-rated race in the state, southwestern Colorado’s Republican primary in Senate District 6, took a strange turn this week. I was taken aback by a Rocky Mountain Right diary reporting that an obviously Left-leaning group known as “Colorado Outlook” is sending out mailers attacking conservative candidate Dean Boehler. The group is listed in the Secretary of State database registered under the name of Julie Wells, the bookkeeper for a large share of the Left-leaning, pro-Democrat, and union-founded political committees in our state. Here they are: 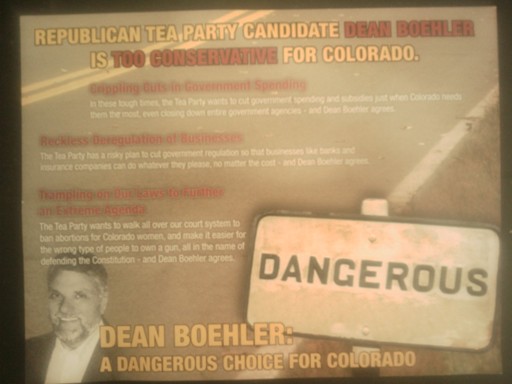 What’s so strange, you say? Well, Boehler is the insurgent candidate in a Republican primary with moderate Representative Ellen Roberts for the SD 6 nomination. Someone please tell me why the Lefties are shooting nasty arrows at the more conservative GOP candidate during primary season?

Is it indeed because they are more afraid of Boehler as a general election foe, even though he got a late start and lags in fundraising? Or is it because they are trying some sort of double-super-secret trick whereby they target conservatives with negative messages that make them want to embrace Boehler over Roberts? My head is spinning. Any reasonable theories to explain the intrigue are welcome.

2. On a smaller note, SD 24 Republican candidate Luis Alvarez today posted on his Facebook page that another Democrat has filed to run in his race against incumbent state senator Lois Tochtrop. It’s true. I am sending an email to G. Robert Stevens to see what is going on. At this late stage in the game, he has to be running a write-in campaign — the longest of longshots against a sitting legislator. I’m curious to know why, and will let you know if I learn any more.