ARVADA–Add one more to the list of Republican candidates for Colorado’s 7th Congressional District. This morning at DiCicco’s Restaurant in Old Town Arvada, U.S. Navy veteran and former McCain presidential senior staff member Lang Sias told a crowd of about 20 supporters that he was officially throwing his hat into the ring to challenge incumbent Congressman Ed Perlmutter. 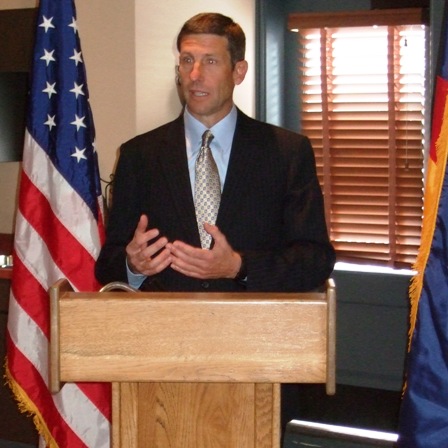 Sias — an Arvada resident and father of two (soon to be three) — touted the need for “mature, commonsense, fiscally conservative principles” in Washington, D.C., as well as for bringing down the federal debt and reforming tax and trade policies. Calling on his national security credentials, he observed: “There is evil in the world, and we can’t ignore it or charm it away.”

Acknowledging his status as a formerly registered Democrat, Sias said his goal is to run an inclusive campaign, “to reach out to the great forgotten middle.”

As Red State diarist pfarrer noted yesterday, the new candidate’s only recorded campaign contribution is to then-Congressman Mark Udall, a Democrat from the 2nd District, in 2002. In fact, Sias lives in the 2nd District, just outside the 7th (this, of course, is perfectly legal).

The same RedState diarist also observed that Lang Sias was recruited into the race by former boss and Arizona Senator John McCain. While I have not yet been able to confirm the extent of McCain’s involvement in Sias’ decision to run, it is worthwhile to note that the new candidate’s general consultant Jon Seaton was McCain’s national field director. (Seaton is working along with political consultant Sean Walsh.) Also, for what it’s worth, the event had the feel of being thrown together at the last minute. 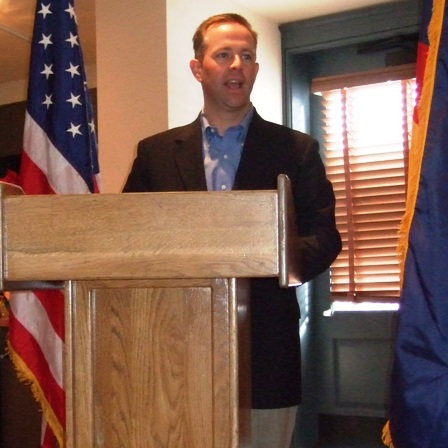 Sias was introduced by Republican former state representative Rob Witwer as a non-traditional politician with statesman-like qualities. “He is the kind of lawyer that facilitates and grows jobs,” Witwer said. Sias’ bio describes his professional experience as an attorney who “specialized in representing technology entrepreneurs.” You may recall last hearing from Witwer when he took his name out of contention for the soon-to-be-open state senate District 16 seat.

My, how times have changed. At this point during the last election cycle you couldn’t scrape up anyone willing to sign on and challenge Ed Perlmutter. Now, by my count, there are at least five GOP candidates willing to give it a go. Ryan Frazier far and away has garnered the most support of any still in the field. In fact, his campaign today announced more additions to his growing list of endorsements.

Other Republican 7th CD candidates (official or likely) include Jimmy Lakey, Mike Sheely, and Michael Demming — but most assuredly not yours truly.

I am working to follow up on today’s event by arranging a sit-down interview with Lang Sias to go more in-depth.