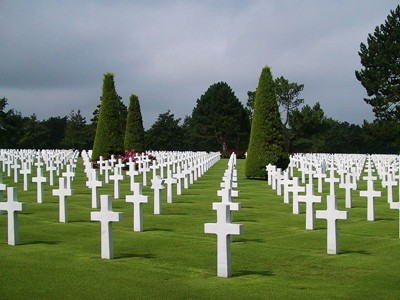 Last night I watched again the opening scenes of Saving Private Ryan. It’s hard to put such moving sacrifice into perspective, on this the 65th anniversary of the D-Day invasion to begin the liberation of Europe. But I leave you with portions of two relevant addresses — one contemporaneous and one retrospective. First, from General Dwight D. Eisenhower on the eve of invasion:

You are about to embark upon the Great Crusade, toward which we have striven these many months. The eyes of the world are upon you. The hopes and prayers of liberty-loving people everywhere march with you. In company with our brave Allies and brothers-in-arms on other Fronts, you will bring about the destruction of the German war machine, the elimination of Nazi tyranny over the oppressed peoples of Europe, and security for ourselves in a free world.

Then there was Ronald Reagan’s tribute to the “boys of Pointe du Hoc” delivered exactly 25 years ago:

Forty summers have passed since the battle that you fought here. You were young the day you took these cliffs; some of you were hardly more than boys, with the deepest joys of life before you. Yet you risked everything here. Why? Why did you do it? What impelled you to put aside the instinct for self-preservation and risk your lives to take these cliffs? What inspired all the men of the armies that met here? We look at you, and somehow we know the answer. It was faith and belief. It was loyalty and love.

The men of Normandy had faith that what they were doing was right, faith that they fought for all humanity, faith that a just God would grant them mercy on this beachhead, or on the next. It was the deep knowledge — and pray God we have not lost it — that there is a profound moral difference between the use of force for liberation and the use of force for conquest. You were here to liberate, not to conquer, and so you and those others did not doubt your cause. And you were right not to doubt.

And while it’s somewhat lesser known, these days also mark the 67th anniversary of the crucial American victory at the Battle of Midway that began to turn the tide of the war in the Pacific.

It is fitting this weekend to reflect on the tremendous sacrifice and achievement made by the generation that fought the Second World War on behalf of American ideals and free people everywhere — and ultimately, for the men serving next to them in the trenches.

Veterans are dying at the rate of 1,000 a day. If you know one still living, take time to show appreciation and listen.