Update: The Daily Blogster and Face The State have more.

Last night, at the Independence Institute‘s 24th Annual Founders’ Night Dinner, conservatives and libertarians didn’t waste much time moping. Sure, Mike Rosen’s election commentary was a bit more sobering than usual. But with Jon Caldara as emcee – and receiving recognition for 10 years as Independence Institute president, a tenure he hopes to continue with his self-professed “lack of marketable skills” – it was hard to get too down.

Fred Holden, longtime hard-working and outspoken advocate for liberty and author of Total Power of ONE in America, won the Vern Bickel Award for Grassroots Leadership. This was certainly a well-deserved honor.

The inspiring and energetic entrepreneur Seeme Hasan took home the Institute’s highest honor – the David D’Evelyn Award – and brought the crowd to its feet. As a first-generation American, Hasan has given back to her community in many ways, and her appreciation for this country’s greatness really shone through. 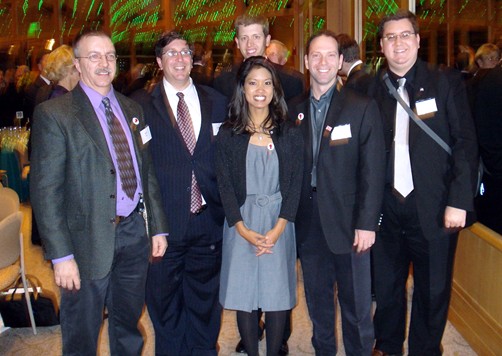 Some Colorado bloggers gather with Founders’ Night’s keynote speaker, one of the shining stars of the conservative blogosphere: (left to right) Mr. Bob, Joshua, me, Michelle Malkin, Rossputin, El Presidente

The keynote speaker was Michelle Malkin, who not only inspired the assembly with her call to continue the fight for the principles of liberty but also “came out” as a new resident of Colorado. Malkin said she felt liberated to have escaped the Beltway, having come West specifically for the educational opportunity available to her children.

The Founders’ Night speaker found a warm welcome truly as “one of us”, and many of the state’s freedom-fighters were charged up for the long fight ahead.