The price of the FasTracks rail expansion â€” if it is to be completed by 2017, as promised to voters â€” has jumped from $6.1 billion to $7.9 billion, according to officials familiar with RTD’s latest analysis of the program.

Approved by voters in 2004 for $4.7 billion, estimates later rose to $6.1 billion – a 30 percent increase. Now they have skyrocketed to $7.9 billion, nearly 70 percent higher than original estimates. According to the Post, RTD either has to narrow the scope of the project, delay its implementation, or ask for more tax money:

Centennial Mayor Randy Pye, who heads the 37-member Metro Mayors Caucus, said Wednesday that “the option of a tax increase is not palatable to the mayors.”

I think the superb cartoonist Ben Hummel has it best: 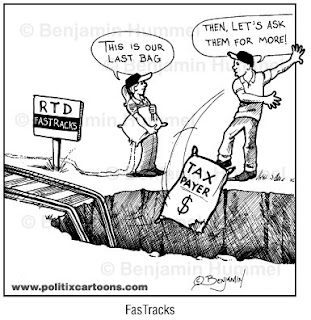 Visit the Independence Institute’s Center for the American Dream to learn about the problems and cost of FasTracks, which also includes the “Human Cost of FasTracks”: